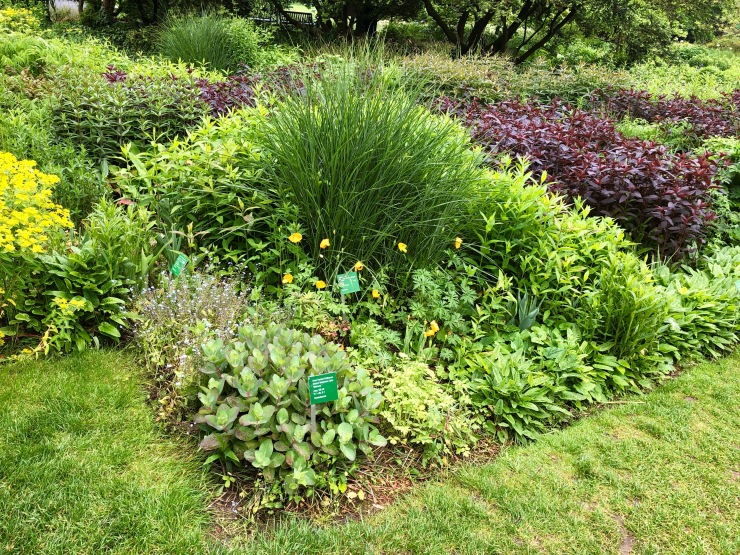 Weinheim, just twenty minutes north of Heidelberg, is along the “Bergstrasse” or mountain road in German. An ancient trade route, the north to south road is known today for vineyards that produce many fine wines. With fertile soil and lots of sunshine, the area’s climate also makes it one of the most productive places in Germany for growing fruit.

Because of its hot, dry summers, and with more sun per year than anywhere in the country, the Bergstrasse region is known as the “Riviera of Germany.” Romans first planted grapes on the area’s steep slopes 2000 years ago. In the eighth century, monks from nearby Lorsch Abbey continued to cultivate the vineyards.

Weinheim is known for its famous garden, Hermannshof, which came highly recommended by a local friend who’s a professional landscape designer. It was late May, the weather was favorable, and so we decided to see the garden for ourselves.

Setting off from Heidelberg, where we’d started our tour of the Rhine region, we whizzed along the A5 autobahn to Weinheim. I had imagined the gardens would be out in the country – or at least in the outskirts of town – so it was quite a surprise when signs led us into in the oldest part of the village. We parked the car and surveyed the winding cobblestone streets, narrow alleys, and large castle ruin on the hill above, but we didn’t see the garden. Then, across the street, in a wall bordering the sidewalk, we spotted an opening. It led down a rustic stone stairway straight into Hermannshof gardens. A high stone wall runs all the way around the property, turning it into a garden oasis. Hermannshof is a free public park that anyone could happen upon.

Two hundred years ago, the property was the private estate of a wealthy family. The grounds were added to over time by a series of landscape designers who transformed it into a thriving garden.

Hermannshof became a “Schau-und Sichtungsgarten,” or display garden for the public, in the 1980’s with the aim of experimenting and studying perennials, so for those who take care of it, it must feel like an invitation to play. The garden includes an enormous variety of plants and trees, some flashy and some subtle.

We roamed the gravel paths that wound through a series of gardens.

Woodlands filled with forest perennials and dogwoods opened into prairies bursting with abundant grasses which led into a rocky, arid Mediterranean landscape filled with purple lavender and yellow santolina.

The gardens are not separated but flow into neighboring habitats subtly, as if they grew alongside one another naturally. It’s like wandering through the woods into a meadow.

Hermannshof is intimate and relaxing compared to the enormous, formal gardens at many European palaces. Plants are identified by markers inviting visitors to look more closely. Combinations are identified for those who want to try them out in their own gardens.

Interestingly, the plants in each area are selected for their habitat rather than their origin. This means that the garden includes specimens that don’t grow side-by-side in nature. For example, the prairie garden might include plants from Africa, Asia, and America, chosen because they grow in similar conditions. The goal is not to recreate gardens from a specific location but to build a community of plants that will adapt to the same setting. 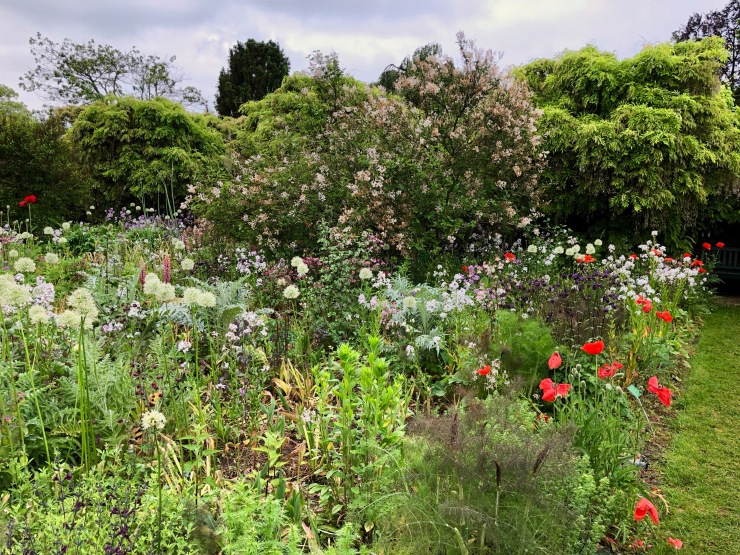 The gardening approach at Hermannshof has several advantages. First, the plants will behave as they do in the wild, creating a more sustainable garden that requires less care. In addition, it gives the gardener the opportunity to experiment with new, unusual, and unexpected combinations of plants. The landscape architect(s) who designed New York City’s High Line used this approach.

Moving toward the back of the villa, the space opens up to a central lawn with a circular path through deep gardens along the perimeter. As you progress, the garden habitats continue to change subtly from meadow to annual garden, water garden to rock garden.

Our walk ended in the amazing “monsoon garden,” inspired by gardens in the far east.

Astonishingly, some of the trees we saw were planted as early as the 18thcentury and are still thriving.

Amazed by the kaleidoscope of color, diversity, and playfulness of the gardens, we could not stop taking pictures. These are just a few of our attempts to capture the beauty of this special place.