Back at the foot of the castle hill is a warren of narrow crooked streets. It’s the oldest part of town. One of our favorite places was the Finkenherd. According to legend, in 922 AD, Heinrich was out bird hunting when the Frankish nobles arrived to offer him the crown. They found him at the Finkenherd cottage, told him they had selected him as their king, and awarded him his regalia. From then on, King Heinrich was known as “Henry the Fowler.”

The original town of Quedlinburg was surrounded by an impressive city wall with towers. As you walk around, you’ll notice parts of the wall and even stumble upon a few remaining towers. Each one is different and has its own story. One of our favorites was the Schreckensturm – or Tower of Horror – with a dungeon that served as a prison during the Middle Ages.

A short walk from the castle hill, the narrow alleys open up to a bright and sunny market square ringed by colorful and intricately decorated half-timbered buildings.

The square is dominated by a magnificent vine-covered town hall at one end. During the Middle ages, Quedlinburg became a prosperous trading town and outgrew its walls. The spacious marketplace is testimony to the city’s affluence.

We wandered into the town hall, where we found stained-glass windows featuring scenes from Quedlinburg’s history. We were also fortunate to see a special meeting room with ornately carved woodwork, its walls covered with beautiful hand-painted murals chronicling the town’s history.

Shortly after we left the town square, we found the oldest surviving residential home in Germany, built around 1300 and now a museum focusing on the history of half-timbered building.

Quedlinburg continued to grow for over six centuries to become an important and splendid city. The half-timbered houses in Quedlinburg weren’t all built in the same era, but over the course of that time, with differences in construction, style, and decoration. Of the more than 1300 houses in Quedlinburg, no two are alike and each has its own unique appeal. After a while, you can even start to pick out the oldest houses and also recognize some of the styles from different periods.

Many houses are brightly colored, a few feature lovely frescos, and most have an assortment of windows. Some are decorated with symbols and carved inscriptions in an effort to bring good luck or ward off evil. It’s like peeping through a window into the past – a glimpse of the hopes and fears of the people who lived there trying to make a dangerous world less hostile. 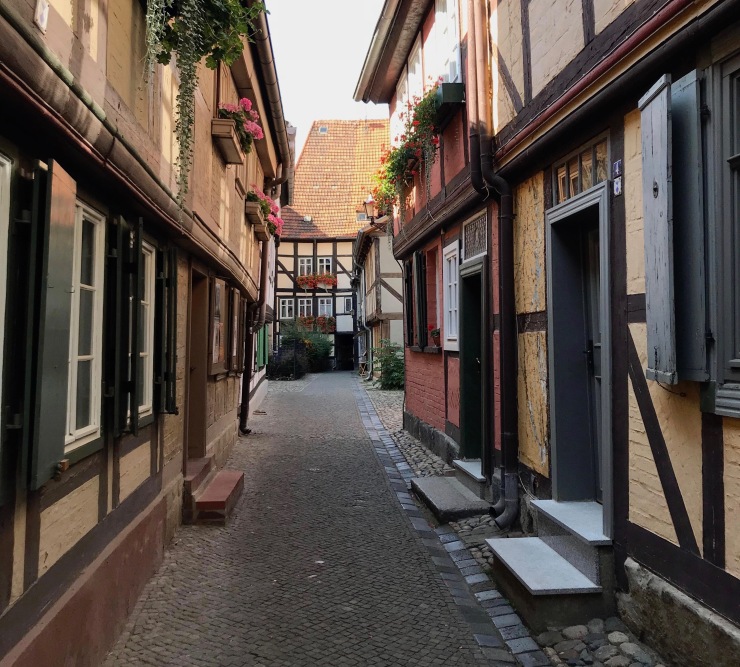 As you might guess, there are no cars in much of the old city of Quedlinburg. The streets are just too narrow. So, one of the best things do in Quedlinburg is to lose yourself in the maze of old streets and chuckle at the funny crooked houses that seem to lean this way and that along the winding cobbled lanes.